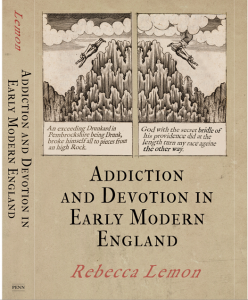 This book illuminates a previously-buried conception of addiction, as a form of devotion at once laudable, difficult, and extraordinary, that has been concealed by the persistent modern link of addiction to pathology. Surveying sixteenth-century invocations, this monograph reveals how early moderns might consider themselves addicted to study, friendship, love, or God. However, it also uncovers their understanding of addiction as a form of compulsion that resonates with modern scientific definitions. Specifically, early modern medical tracts, legal rulings, and religious polemic stressed the dangers of addiction to alcohol in terms of disease, compulsion, and enslavement. Yet the relationship between these two understandings of addiction was not simply oppositional, for what unites these discourses is a shared emphasis on addiction as the overthrow of the will.

Etymologically, “addiction” is a verbal contract or a pledge, and in the sixteenth century addiction stood as a form of devotion. Even as audiences actively embraced addiction to God and love, writers warned against commitment to improper forms of addiction, and the term becomes increasingly associated with disease and tyranny. Examining canonical texts including Doctor Faustus, Twelfth Night, Henry IV, and Othello alongside theological, medical, imaginative, and legal writings, this book traces the variety of early modern addictive attachments. Although contemporary notions of addiction seem to bear little resemblance to its initial meanings, this study argues that the early modern period’s understanding of addiction is relevant to our modern conceptions of, and debates about, the phenomenon.

Reviewed in:
The American Interest
https://www.the-american-interest.com/2018/04/13/addicted-to-addiction/
Reading Religion: A Publication of the American Academy of Religion
http://readingreligion.org/books/addiction-and-devotion-early-modern-england 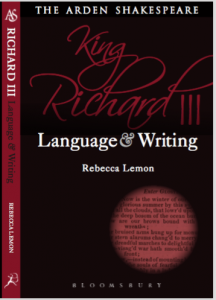 A new type of study aid which combines lively critical insight with practical guidance on the critical writings skills students need to develop in order to engage fully with Shakespeare’s texts. The book’s core focus is on language: both understanding and enjoying Shakespeare’s complex dramatic language, and expanding the student’s own critical vocabulary as they respond to the play. The book explores several different approaches to Shakespeare’s language. It looks at how the subtleties of Shakespeare’s language reveal the thought processes and motivations of his characters, often in ways those characters themselves don’t recognise; it analyses how Shakespeare’s language works within or sometimes against various historical contexts, the contexts of stage performance, of genre and of discourses of his day (of religion, law, commerce, and friendship); and it explores how the peculiarities of Shakespeare’s language often point to broad issues, themes, or ways of thinking that transcend any one character or line of action. Each chapter includes a “Writing Matters” section, giving students ideas and guidance for building their own critical response to the play and the skills to articulate it with confidence.

Under the Tudor monarchy, English law expanded to include the category of “treason by words.” This book investigates this remarkable phrase. In doing so, the book establishes how English citizens expressed competing notions of treason in opposition to the growing absolutism of the monarchy. Analyzing texts surrounding the Earl of Essex’s 1601 rising and the 1605 Gunpowder Plot, including writings by John Donne, Ben Jonson, and William Shakespeare, the book argues that the articulation of diverse ideas about treason within literary and polemical texts produced increasingly fractured conceptions of the crime of treason itself. Further, literary texts, in representing issues familiar from political polemic, helped to foster more free, less ideologically rigid, responses to the crisis of treason. As a result, such works of imagination bolstered an emerging discourse on subjects’ rights. Treason by Words offers an original theory of the role of dissent and rebellion during a period of burgeoning sovereign power.

This special issue contributes to the humanistic turn in addiction studies. Shifting away from medicalization of addiction, contributors argue instead that even as addiction is at the forefront of current global conversations on biopolitics, its history is only beginning to be uncovered. By reassessing what counts as addiction and where we might find it, the authors present new approaches to the concept that addiction can be an expression of devotion (as its Latin etymology suggests), can provide authorial inspiration, or can be defined by legal bias and institutional structures, a phenomenon largely devised to exclude or target racialized groups (as with imperial and colonial attitudes toward drug use).