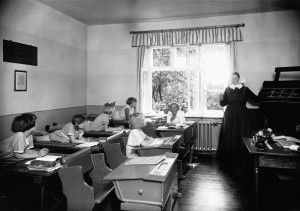 Words are the province, so Hamlet problematically reasons, of the “whore,” “drab,” and “scullion.”  This course will, by contrast, take words seriously, investigating their etymologies and their histories in order to illuminate the texts they live in. Drawing on Raymond Williams’s approach to “keywords,” this class begins by investigating the recent flourishing of scholarship on words, following what Jeffrey Masten has called a “renewed historical philology.” In his appeal to attend to words and their histories, he writes, “We have not sufficiently attended to etymology—the history of words (the history in words).” Then, energized by readings and manifestos by Adorno, Williams, Masten, Roland Greene, and others, we will begin our primary investigations: studying keywords in early modern literature. We will concentrate each week on a play or poem(s) in tandem with a critical piece that illuminates a keyword. In a week on Shakespeare’s sonnets, I invite you to select our keywords. Beginning with Richard III,we will study the words “now,” “determined,” and (following Ramie Targoff’s essay on the play), “amen.”  For Othello, keywords include “possession” and “dilate” (following the work of Patricia Parker on delation/dilation). Our study of The Merchant of Venice will concentrate on the words “bond,” “conversion,” and “blood” (reading the work of Amanda Bailey on bonds, and Janet Adelman on blood). For Twelfth Night we will consider the word “baffle” (reading Adam Zucker on this term and phenomenon). As the course unfolds, I am open to your own reading interests, as we decide what keywords we study, in what texts.

English 491 (Seminar in Literary Studies): Shakespeare and the pleasures of tragedy

The triumph! again, put money after the effect has been fully produced.–The last Speech, the motive-hunting of motiveless Malignity–how awful! In itself fiendish–while yet he was allowed to bear the divine image, too fiendish for his own steady View.–A being next to Devil–only not quite Devil–& this Shakespeare has attempted– executed–without disgust, without Scandal! (Samuel Taylor Coleridge, note in his copy of Shakespeare as he prepares his 1818-19 lectures. In Lectures 1808-1819 On Literature 2: 315)

Why do we enjoy tragedy? What are the ethical implications of watching a tragedy unfold from the comfort of a cinema or theatre seat? Are we cold-hearted in paying to see tragic events onstage or onscreen? Or, alternately, are we ostrich-like when we ignore tragedy in favor of sitcoms and rom-coms? This class takes up questions posed by the art of tragedy. We do so by reading classic theories of tragedy by Aristotle, Freud, and Nietzsche; and by encountering Shakespearean tragedy in its various forms. In addition to studying Shakespeare’s four great tragedies (Hamlet, Othello, Macbeth and King Lear) we will also read plays – such as Measure for Measure and The Winter’s Tale – that follow a tragic trajectory, only to take a radical and arguably problematic turn in the end.

This course investigates the legal and political concepts of “tyranny” and “slavery” in the works of Shakespeare and his contemporaries. From Richard III to Macbeth, and from Shylock and Othello to Caliban, Shakespeare exposes the workings of the tyrant and interrogates the bondage of service and slavery. His portraits pose questions of agency, law and cultural normativity: when can political subjects rise against a tyrant? What form of resistance might slaves offer to tyrannical masters? Shakespeare’s answers resonate with vociferous debates on resistance and tyrannicide in the political writings by his contemporaries: we will read the works of French jurist Jean Bodin, English monarch King James I, and Italian political theorist Niccolò Machiavelli next to Shakespeare’s plays with an eye to investigating how early modern writers imagined the categories of tyrant and slave, and how their writings deepen our understanding of the long history of these categories in Western legal thought.

English 230: Shakespeare and His Times

This course examines a body of dramatic literature that has had a profound and lasting effect on the English-speaking cultures of the modern world. We will ask what has made Shakespeare such an enduring influence in the cultures of the West and in the larger global community surrounding us. In investigating this question, this course will focus on Shakespeare’s language, his stagecraft, his literary “genius,” and his legacy, exploring his plays through two major themes: villainy and marriage. In both units we will examine how Shakespeare introduces a theme in an early play and reworks it later in his career. We will then see how Shakespeare condenses both themes of villainy and marriage in Hamlet.

ARLT 100: Shakespeare and His Time

This course will offer a close study of Shakespeare’s plays and poems in order to introduce you to Shakespeare’s language, his stagecraft, his literary “genius,” and his legacy. After an opening week on close reading Shakespeare’s sonnets, we will turn to a case study of Richard III. This provocative Shakespeare play participates in a Tudor legend of the villainous King Richard, who murdered his way to the throne. This play provides the template for subsequent Shakespeare plays and characters (Othello, Macbeth, King Lear); and it also proves inspiration for generations for writers and filmmakers. After our close study of Richard III and its legacy, we will turn a complimentary, opposite topic: Shakespeare, marriage and magic.

English 422: Literature of the Seventeenth Century

English 422 (English Literature of the 17th century) examines literature produced in a time of political crisis. Some authors addressed the period’s political upheaval directly, participating in the civil war. Others writers found solace in love, God, drink or travel. We will examine all of these responses. In doing so we will read the compelling and influential poetry, prose and drama by writers such as Shakespeare, Donne, Jonson, Lanyer, Bacon, Milton, and Behn. The course’s final project will offer a creative option, such as writing your own sonnet sequence, designing your own book, or producing a multi-media travelogue.

Senior Seminar in Literary Studies: “Shakespeare and the Pleasures of Tragedy” (ENGL 491).